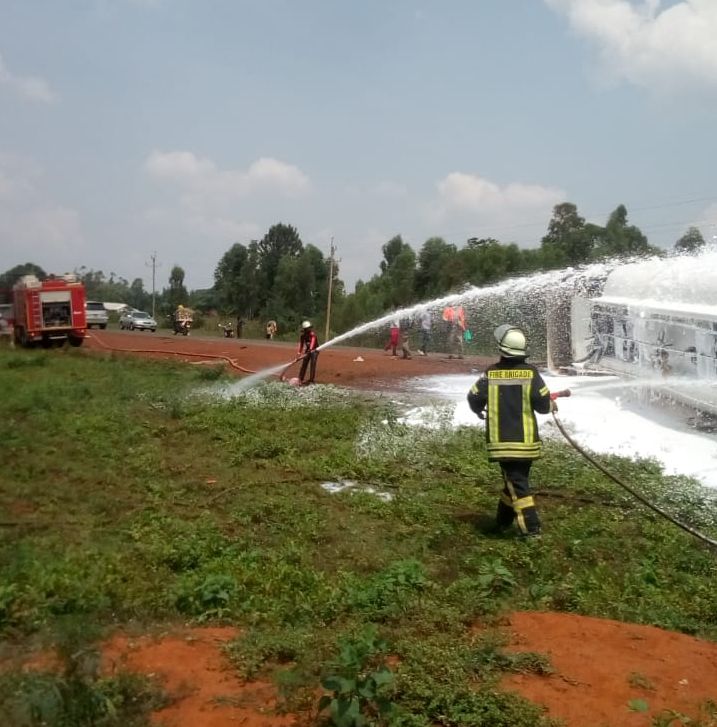 The looming disaster was averted on Thursday morning when a Petrol tanker overturned at Bumala, Busia County, along the busy Kisumu-Busia highway. The tanker was loaded with petrol and it was headed to Kampala when the accident occurred at 7 AM.

Witnesses said the tanker lost control and overturned when the driver veered off the road to avoid overrunning a Boda Boda rider and an oncoming matatu.

Busia County disaster response unit took to the scene of the accident a few minutes after receiving calls from area residents informing them on the disaster in waiting. They sprayed the tanker and the accident scene with an aqueous film-forming chemical to prevent the spilt fuel from igniting and causing damage to property.

The director of disaster management Mr Joseph Oseere supervised the mission and he congratulated the emergency response team for the quick response that helped prevent a major crisis despite the high volume of fuel that was spilt.

“Our emergency response team is well equipped to handle such emergencies and I urge members of the public to stay away from such scenes of accidents to prevent casualties in the event of an explosion,” He said

Petrol tanker accidents often result in a high number of fatalities. A similar accident claimed the lives of 40 people and involved 14 other vehicles near Kinungi trading centre in Naivasha in 2016.

The driver and the turn boy of the truck sustained injuries and were rushed to the hospital.